…He is an embodiment of the spirit and aspirations of a nation. This heroic figure is not the history as it occurred; he is the history as it was desired. He is more articulate than an account of wars and massacres, revealing convictions of a nation that has long held such a vision…
An introduction to Rostam and Esfandiyar, p. 5, Shahrokh Meskoob
This series introduces a man whose eccentric glories belong to a remote, ambiguous past. His convictions were just a cover-up for the absurdity of his everyday life.
Alireza Fani 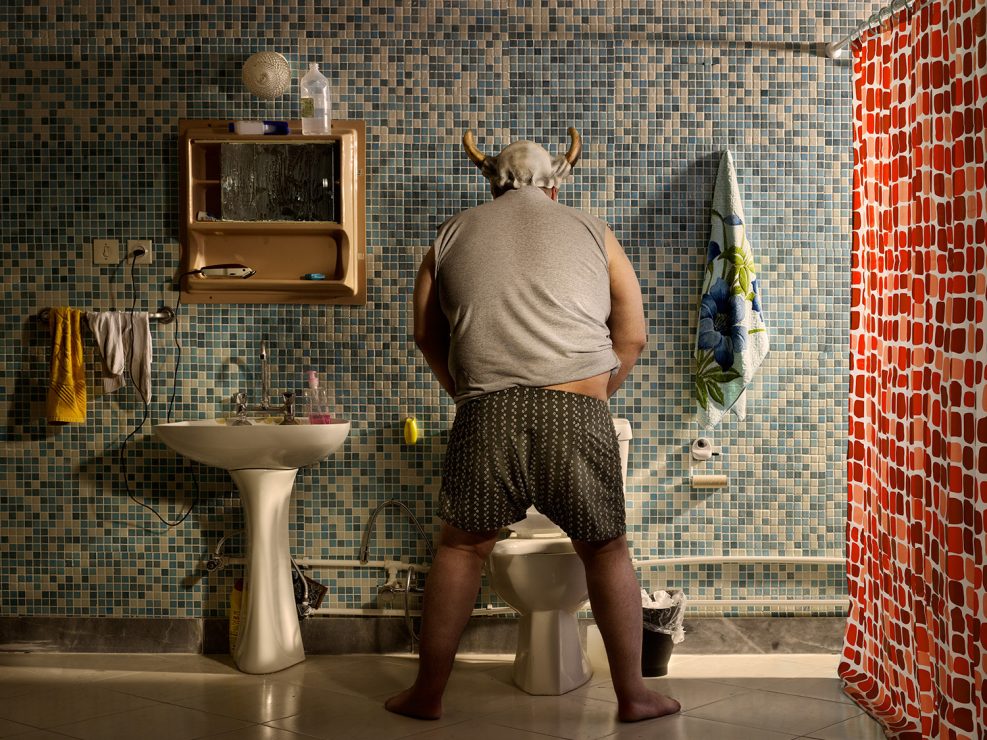 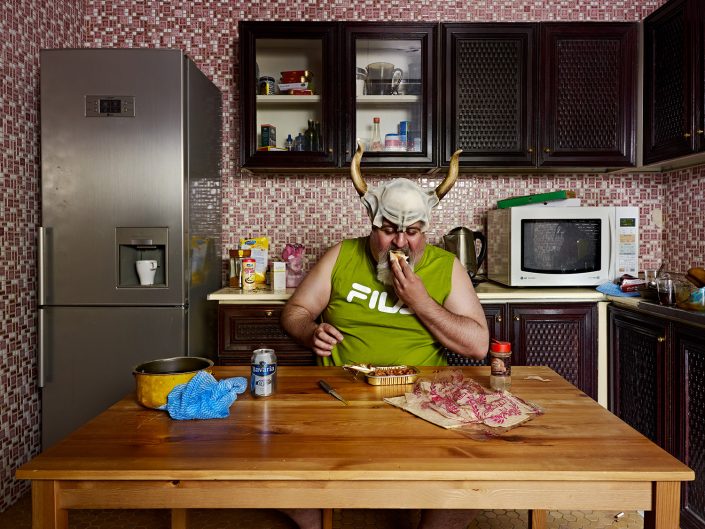 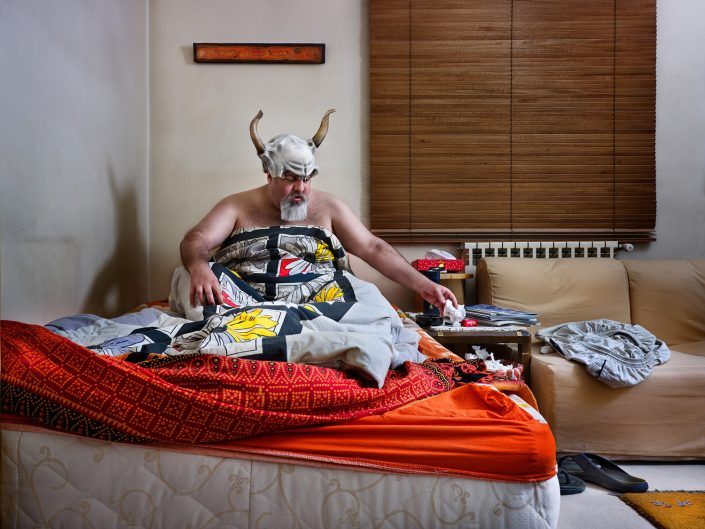 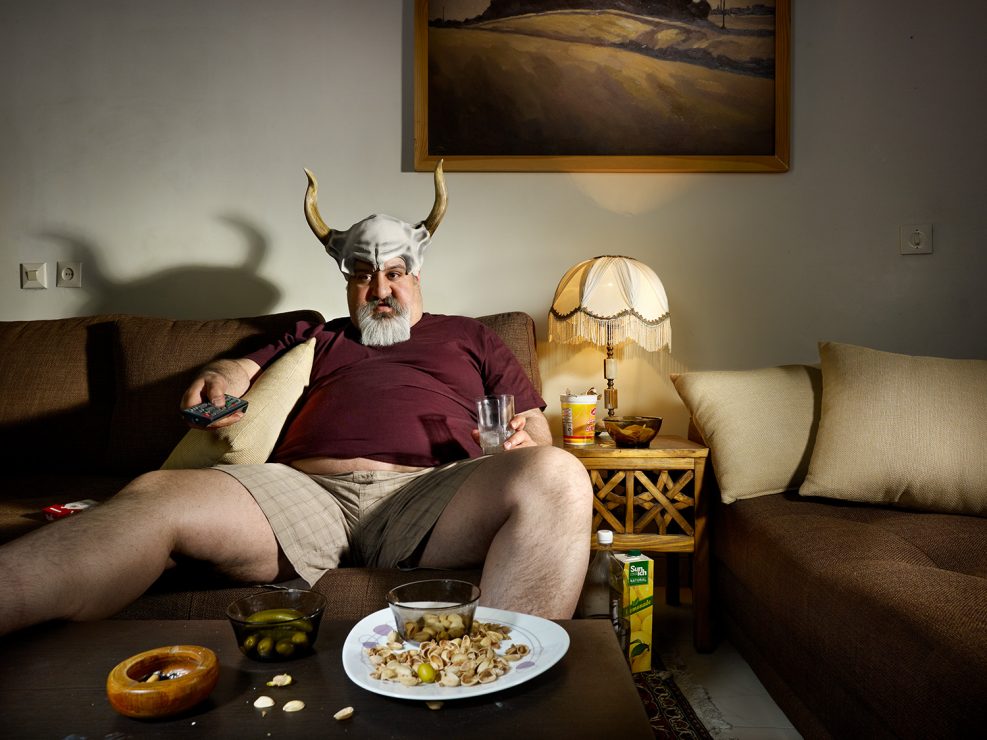 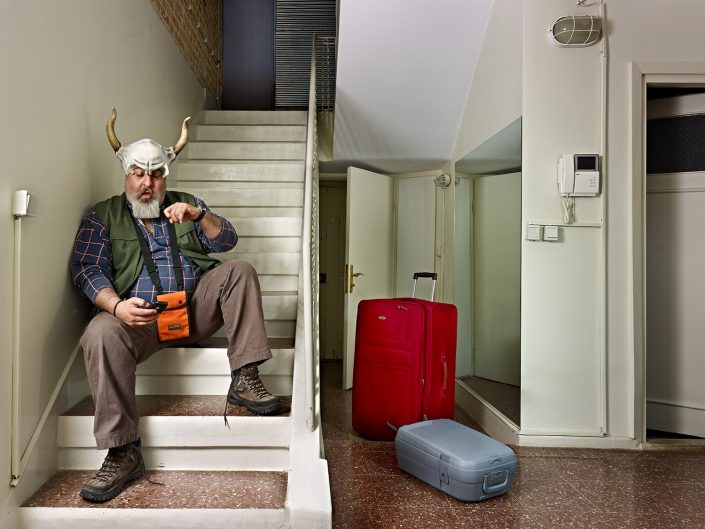 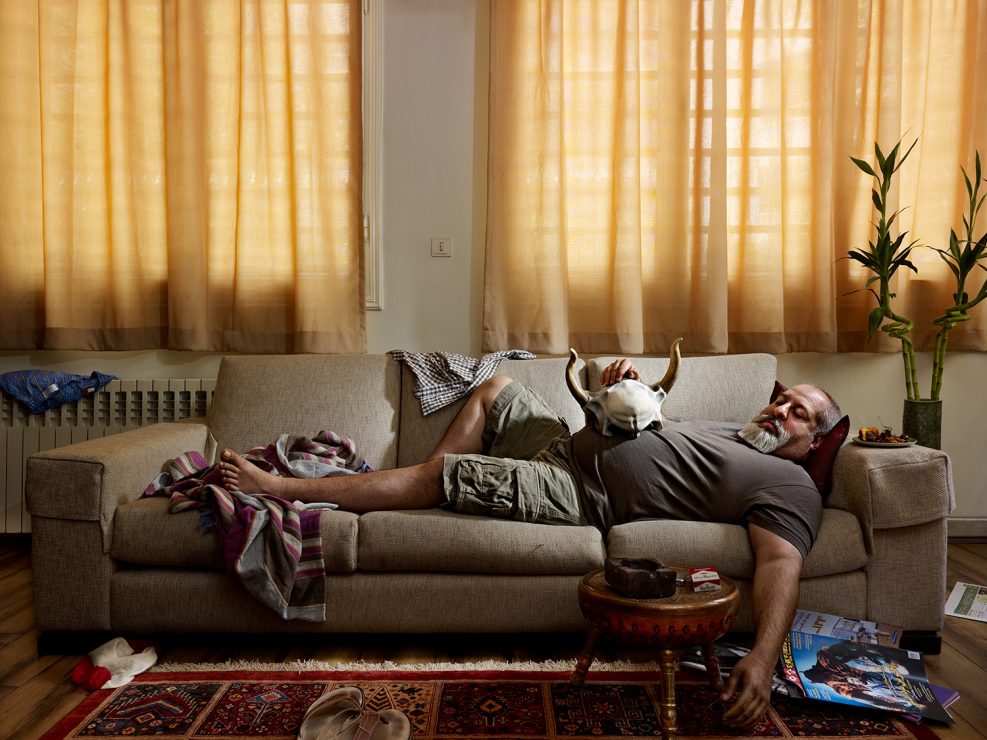 A stout man with a present-day clothing and façade is wearing a horned helmet, seen in situations that are not consistent with his formidable appearance.
Evident arti ciality of the pictures in contrast with their high resolution and depth of eld, solidity of images with strong compositions compared to a haphazard subject, and calculated elements in images in contrast with clumsiness of the main character, are bitter paradox of our times.
Like a novel that accurately describes the author, details of the subject, setting and behavior, Alireza Fani’s visual novel scrupulously puts such scenes on display. In a work titled Perseverance, we see the subject from behind urinating in the toilet. He is barefoot, wearing casual shorts and a T-shirt. His white socks are hanging beside a towel; his electric razor is still plugged in; there is little hygiene materials and cosmetics. Even if the way he is standing does not look so sore, application of the term “perseverance” to this artwork is no doubt a paradox that brings a smile to the viewers’ lips. In Employment he is reclining on the oor, wearing a red T-shirt with images of western athletic teams. He has his cell phone in one hand and a cigarette in the other, inattentive to a laptop computer in front of him. In Ready-made he is eating conserved food out of a can with no ceremonies, no plate and no glass. A can of non-alcoholic beer is showing o and a pan and a kitchen napkin are left on the kitchen table. He is preparing to sleep in Self-Su ciency. In his work titled Noise, Alireza Fani is searching for the lost signals of his TV, a glass of drink in his hand and pickles and pistachio on the table. In Intermission, Alireza Fani is sleeping on a sofa, where he is not wearing the horned helmet, placing it on his chest. Clothes and magazines are scattered on the oor. Green Card shows him sitting on the stairs with his suitcase, as if he is waiting for a taxi to go to the airport.
Who is he? His clothes, appearance, personal items, furniture, and kitchen are familiar; only his horned helmet makes him appear strange. A horned helmet used to indicate divinity in ancient cultures of Mesopotamia. Kings used to wear a horned helmet to show they were divine. Horned helmet
was common during the Elamite period in Iran and was seen in motifs left from the Sassanid dynasty. The horned helmet of this collection, however, connotes Rostam in Persian paintings and co eehouse paintings. Rostam kills the White Goblin and wears his skull. The helmet has become part of his identity as his helmeted image is seen time and again.
As Fani quotes Shahrokh Maskoob’s “An Introduction to Rostam and Esfandiyar”, Rostam, a mythical hero, is “a manifestation of spirits and aspirations of a nation”. He is more articulate than an account of wars and killings in introducing the concepts in Iranian society. It is a great regret, however, that this mythological gure is degraded for some to a cartoon gure, turned into an element among a large array of incongruous, di erent elements.
Di erent positions of the subject in pictures remind us of a class of people in contemporary Iranian society which, through particular narratives, eulogizes part of Iran’s history, prides itself in human rights manifesto of Cyrus the Great but degrades Arabs, Afghans and Third World countries, believes in supremacy of Iranian race over the West, goes to extremes to safeguard Persian language, yet it seeks to leave the country. This stratum of society neither has an idea, paradigm, and solution nor acts meaningfully. In a race to take pride in the past, these people brought passivity to the present and abandoned any plans for the future.
A celebration of the past, passivity in the present, and absence of any plans for the future are not limited to a particular group of people, though. Along with other concepts, including “perseverance”, “self-su ciency” and “employment”, the horned helmet comes to include a group, which although sometimes positions itself against that particular class of society, represents the other side of the same coin at other times.
Using a style similar to that of the series A Memorial for Today, Alireza Fani’s I Am the One Who … is getting further away from political commentary (a highly tantalizing subject), instead providing cultural commentary for a cross-section of contemporary Iranian society.
Hamid Severi